For those who have a child with ADHD or struggle with ADHD themselves, there is often a desire to pursue treatment to better manage the symptoms such as inability to focus, inattention, and mood instability. Dr. Julia Rucklidge from University of Canterbury has spent decades researching non-pharmacological treatments for ADHD — specifically clinical multinutrient formulas, including the highly research-backed Hardy's Daily Essential Nutrients.

Since the 1970s, there has been an array of research conducted on non-pharmacological treatment for ADHD. There have been studies that looked at food dyes, sugar, mega-dose vitamins, amino acids, single minerals, fish oil, and more. Varied results left room for Dr. Rucklidge to pursue research on the effect of clinical strength broad-spectrum micronutrients for symptoms of ADHD. Dr. Rucklidge’s study of broad-spectrum micronutrients differs from these previous studies because it takes a look at the impact of taking a specific ratio of very balanced vitamins and minerals in conjunction with one another, rather than only studying one nutrient at a time, such as iron or zinc.

Dr. Rucklidge’s research frames food in the context of micronutrients, not just macronutrients.

Macronutrients are protein, fats, and carbohydrates. This is what we typically see in food pyramids and is often referred to for a healthy and balanced diet. Though this is important, Dr. Rucklidge’s research focuses on micronutrients, which include minerals and vitamins required in small amounts and which are essential for the production of enzymes, hormones, and neurotransmitters in the brain.

To further stress the importance of using the right balance of micronutrients, Dr. Rucklidge discusses how they affect brain function. The brain pathways that produce hormones, enzymes, and neurotransmitters require a myriad of different micronutrients such as iron, zinc, magnesium, and dozens of others. If micronutrient intake is deficient, the brain’s ability to make important chemicals such as adrenaline, dopamine, and serotonin may become compromised. For someone with ADHD, many of these hormones are essential for regulating symptoms such as impulsivity, moodiness, and anxiety. Brain pathway success depends on the complex interactions of all these elements, which is why the research she conducted focused on clinical strength broad-spectrum micronutrients.

Dr. Rucklidge has conducted many studies, from case reports and case studies to randomized controlled trials. In testing clinical micronutrients, she uses a dose in what she calls the “therapeutic range.” This amount of micronutrients was above the Recommended Dietary Allowance (RDA) but well within the Upper Limit (UL), to ensure there is no increased risk of adverse events. These studies have been conducted with both adults and children, looking at the effects of broad-spectrum micronutrients on symptoms of ADHD and other comorbidities. In her various studies, she examined the long-term effects of broad-spectrum micronutrients when use was continued, stopped, and when the individuals switched to medication.

In her studies, all of which were independently funded and none of which have financial ties to supplement companies, Dr. Rucklidge found that, as a whole, clinical strength broad-spectrum micronutrients are an effective treatment for ADHD and associated symptoms. According to Dr. Rucklidge, “all studies on broad-spectrum micronutrients show some benefit either in core symptoms or associated symptoms if targeting people with symptoms.” 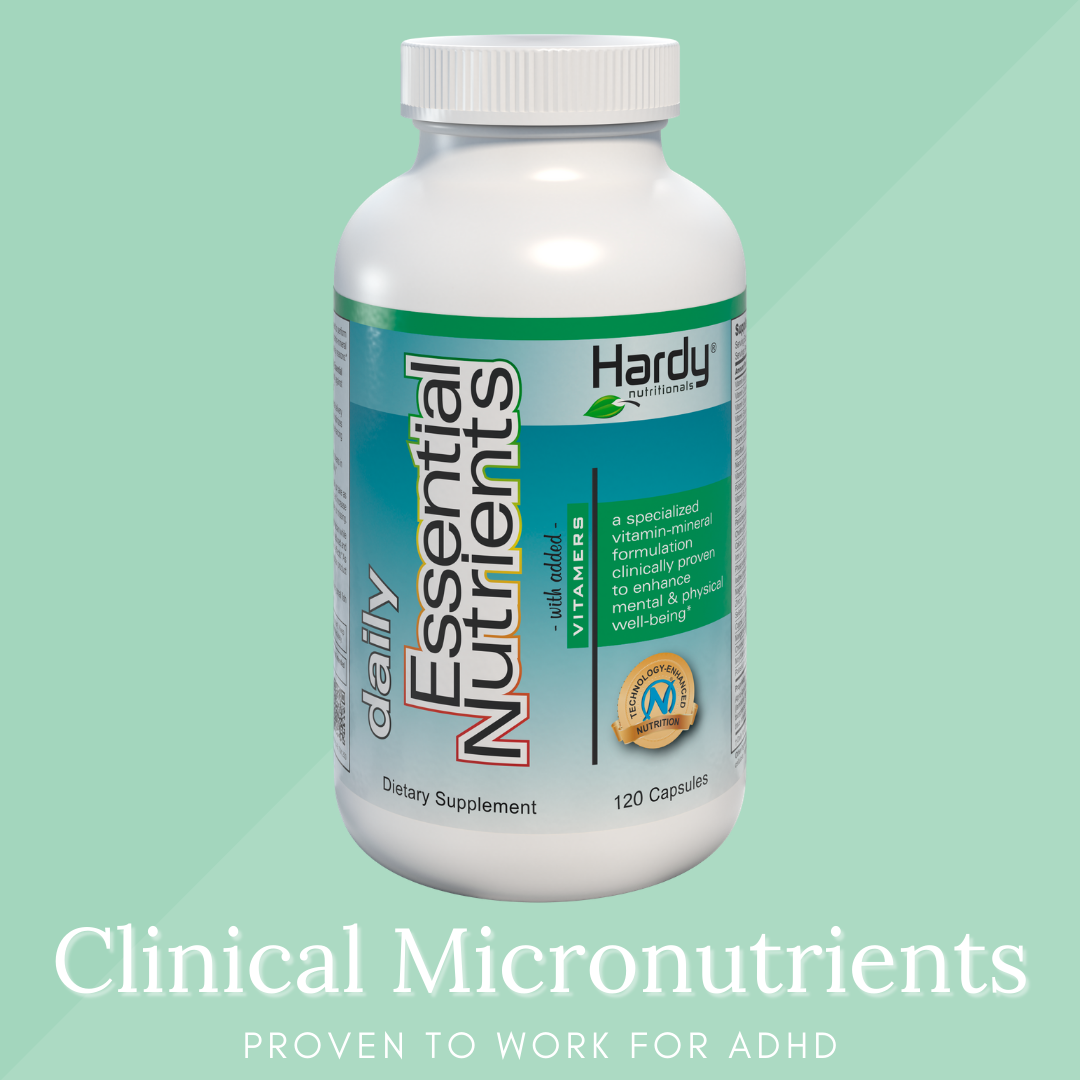 One of her studies, which examined total ADHD symptoms in adults, showed improvement in symptoms when self-reported, reported by an observer, and when reported by a clinician. Findings from another study showed that when children went through a series of taking micronutrients on and off, their total ADHD symptoms improved while taking the micronutrients. Another study showed that children reported improved attentiveness, improved mood, less anxiety, and better global function.

Dr. Rucklidge does make a point to acknowledge that broad-spectrum micronutrients were not an effective treatment for everyone and that for some, medication works more effectively to manage symptoms of ADHD.

Though this method may not be effective for everyone with ADHD and associated symptoms, this is a promising method for better managing ADHD without the side effects often associated with pharmaceutical options.

Learn more about Daily Essential Nutrients and its effectiveness in treating ADHD at Try.HardyNutritionals.com/focus.

About Hardy Nutritionals®
Hardy Nutritionals® multivitamin-mineral products are powered by our proprietary NutraTek™ mineral delivery technology, which combines each mineral with specialized organic molecules—just like nature—to optimize absorption and distribution to body cells. Our flagship supplement, Daily Essential Nutrients, is widely considered to be the most research-backed micronutrient treatment.
The Better Brain: Overcome Anxiety, Combat Depression, and Reduce ADHD and Stress with Nutrition
Specialized Micronutrients Studied as Alternative for Mood Disorders
Hardy Nutritionals is interested in what you think of our articles. We welcome your comments but request that they relate to the article you are commenting on. Comments that do not relate to the article will be marked as SPAM and rejected. Thank you. Hardy Nutritionals.
X