What Are You Feeding Your Most Hungry Organ - The Brain?

As children, we’re taught about the importance of eating right: Drink milk, get strong bones. Eat vegetables, get strong muscles. But it seems like one body part is consistently left out of the narrative: the brain.

The brain is the most metabolically active organ in the body, which means that it demands the most nutrients in order to function optimally. Yet most of the general public hasn’t been taught how nutrition relates to the brain's functions. That’s what psychologists Dr. Julia Rucklidge and Dr. Bonnie Kaplan are trying to do with the release of their latest book, The Better Brain: Overcome Anxiety, Combat Depression, and Reduce ADHD and Stress with Nutrition.

These world-renowned nutrition experts sat down with Nicole Christina on her podcast Zestful Aging to chat about why nutrients are pivotal in helping individuals heal after traumatic or stressful events, what challenges health professionals face introducing nutrients in a pharmaceutical-driven world, and why feeding the brain actually matters. To listen to the full episode click here or see below.

Breaking Down the “Why”

“Every minute of every day, minerals and vitamins are enabling your brain to produce things like neurotransmitters, enable brain cell communication, etc., and you want to optimize that communication in your brain,” Dr. Kaplan explains.

Where does brain optimization begin? According to Dr. Rucklidge and Dr. Kaplan, it starts with ingesting more nutrients. While both researchers agree that plenty of good books on the topic already exist, Dr. Rucklidge believes what makes their book, The Better Brain, unique is that not only does it explain why we need specific nutrients, but it also gives insight into why we may not be getting enough of them from whole foods.

“A lot of the book is dedicated towards talking about the research that Bonnie and I have been involved in over the last two decades, looking at the effect of giving people a broad spectrum of vitamins and minerals in a pill form and what effect that has on physiological functioning and psychological health; in particular, looking at people who are struggling with issues like Attention Deficit Hyperactivity Disorder (ADHD) or depression. We explain why the additional nutrients may be helpful and some of the reasons we go into are things like some people may need more nutrients than they can get out of their food because of where they are at in their life stage,” Julia explained on the podcast.

Some people may need more nutrients simply because they’re not meeting their body’s requirements when it comes to diet. In that case, Dr. Rucklidge recommends switching to a whole grain-based diet and really evaluating labels. If you’re still not feeling your best, it could be the result of soil depletion, something completely out of the consumers' control. Research has shown over time the soil in which our crops are grown is actually losing its vitamin and mineral content, meaning the food that comes across our table isn’t actually fulfilling our vitamin needs. Other people may simply be genetically predisposed to need more nutrients in order to function optimally.

“We’re the first ones to tell the general public about this link to soil depletion,” Bonnie Kaplan explains. “We talk about microbiomes. We have a microbiome in our mouth, in our gut, but there’s also a microbiome in our soil. And that’s what’s being destroyed and it’s having an impact on the nutrient density of the food that we consume. So even if you haven’t inherited the need for an unusual amount of minerals and vitamins to make your brain cells communicate well, you might be thinking that you’re eating well enough to get sufficient vitamins and minerals and you weren’t. Not because of your fault. Because we are really seeing a decrease in nutrient density in the crops that are all over the world that we’re dependent on.” (More on that here).

One of the most groundbreaking discoveries Drs. Rucklidge and Kaplan have made in their research on mental health and nutrition is how powerful micronutrients can be for individuals in times of stress. Dr. Rucklidge explains the “triage theory.” During times of stress, the body will delegate nutrients to survival functions, which in turn means other functions like the ability to regulate sleep, concentration, or mood, are put to the side. She argues that at times like that, it’s pertinent to provide extra nutrient support to the body in the form of broad-spectrum micronutrients.

She tested this theory in September 2010, right after an earthquake hit outside of Christchurch, New Zealand. During that time, her team had already been looking at the effects of micronutrients in adults who were struggling with symptoms associated with ADHD. When the earthquake hit, it was an opportunity for a “natural experiment.”

Dr. Rucklidge and her team asked “What happens when you are taking vitamins and minerals in an amount that’s greater than you would typically get out of a diet? Do those people recover more quickly from the stress of the earthquake activity and the ongoing aftershocks, compared to people who weren’t taking nutrients?”

Yes, it turns out, they do!

In 2011, Christchurch was hit by another devastating earthquake in their city. Unfortunately, this one had far more devastating damage. 185 people died, thousands more were injured, and the central city was destroyed.

“At that point, we could ask a different question which was, 'If you give people micronutrients after a stressful event, what happens?'"

They were able to split the study into groups: participants taking broad-spectrum micronutrients, participants taking a simple vitamin B-complex, and those who didn’t participate in the study but allowed the team to follow them over time to track their results. This “treatment as usual” group may have sought out counseling, medication, or carried on as usual, but didn't receive micronutrients or a vitamin B complex.

“What we found was the people who were given nutrients, whether it was a B Complex or the broad-spectrum, showed really substantial and significant improvement in their stress, anxiety, and mood, relative to those who didn’t have the nutrients. They pretty much stayed the same. Even a year later, those who had been given the nutrients were doing better than those who hadn’t received the nutrients. So it was a pretty stunning and remarkable finding and so easy to intervene with nutrients when you are faced with a really challenging, stressful, and life-threatening situation,” Rucklidge summarized. 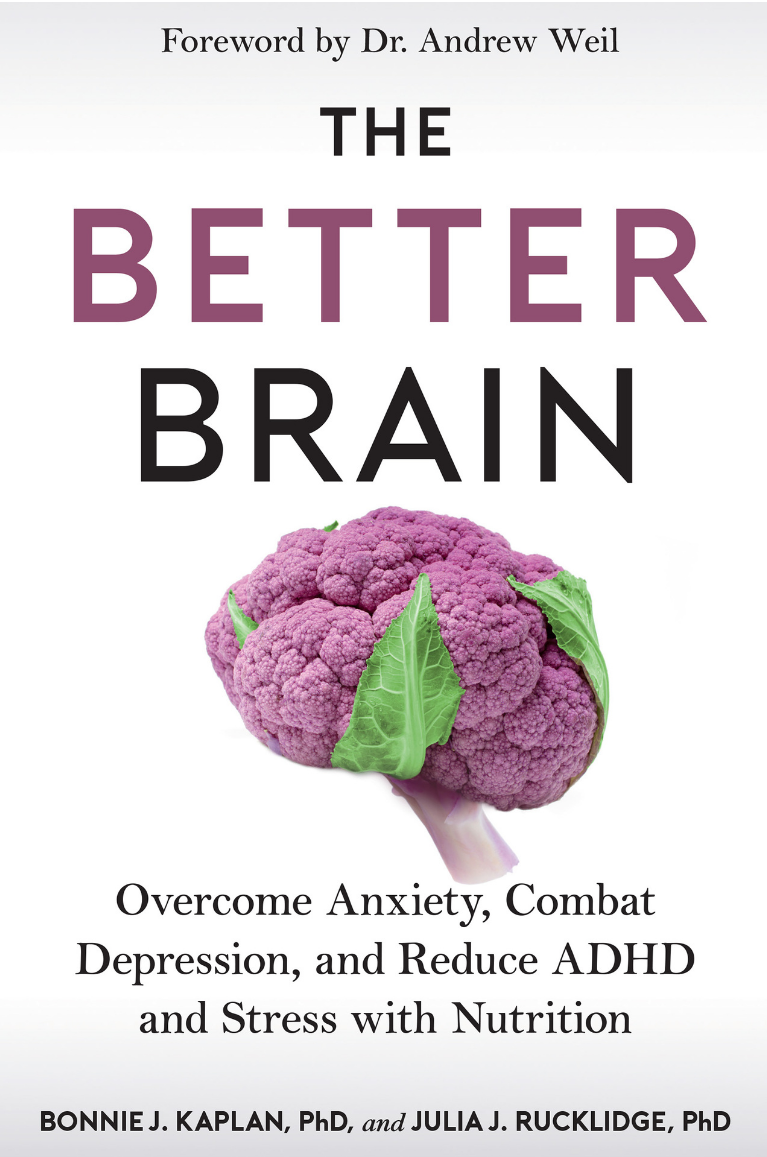 In 2013, Bonnie Kaplan put Rucklidge’s previous findings to good use, too. Her town suffered a once-in-a-century-type flood. While the devastation wasn’t as severe as the earthquake studies, Kaplan once again received the exact same results.

“Both the broad-spectrum and the B complex in this general population sample (they weren’t clinically diagnosed) — they all did better 4-6 weeks [later] than the comparison group,” said Kaplan.

Again and again, the scientists tested this theory but weren’t able to get traction with local health services, government, or physicians to tell locals that they could combat the disaster with something as easy and cheap as picking up a B-complex at the local drug store.

“They said absolutely no, the physicians blocked me, the dieticians blocked me, and the next summer after that, our province published the results of mental health, and instead of the curve going down it went up up up for both mood and anxiety disorder and referrals to psychiatrists,” Kaplan shared.

This all goes back to the problem Kaplan and Rucklidge stated at the beginning of the podcast: the general public isn’t being given the knowledge they need about micronutrients to fully care for their brain.

“What motivated us to write the book is that it’s horrible that the public is not being told about this research,” Bonnie explained. “I mean, instead what they read all the time is ‘Don’t take vitamins they're going to kill you.’ Well, we evolved to require vitamins and minerals so we know that’s nonsense. But that’s what they’re getting in the media. We just need to try to wake people up to the fact that there’s a whole story out there that they’re not hearing about. And the story is told by an industry that has massive advertising funds.”

“Maybe the reason your antidepressant isn’t helping you enough is that you’re treating a suboptimal level of nutrients for your brain to function with medication instead of giving your brain the nutrients it needs. Some people simply have a hungry brain.”

About Hardy Nutritionals®
Hardy Nutritionals® multivitamin-mineral products are powered by our proprietary NutraTek™ mineral delivery technology, which combines each mineral with specialized organic molecules—just like nature—to optimize absorption and distribution to body cells. Our flagship supplement, Daily Essential Nutrients, is widely considered to be the most research-backed micronutrient treatment.
Micronutrients Help Mosque Massacre Survivors
The Better Brain: Overcome Anxiety, Combat Depression, and Reduce ADHD and Stress with Nutrition
Hardy Nutritionals is interested in what you think of our articles. We welcome your comments but request that they relate to the article you are commenting on. Comments that do not relate to the article will be marked as SPAM and rejected. Thank you. Hardy Nutritionals.
X