For Clinicians: Getting Started With Daily Essential Nutrients

Posted on : September 07, 2018 by Hardy Nutritionals® — No Comments
When working with patients who are transitioning to Daily Essential Nutrients clinical broad-spectrum micronutrients, it is imperative that clinicians take time to review our Clinical Reference Guide.  We also recommend speaking with a member of our science team to ensure familiarity with medication-reduction protocols and best practices. 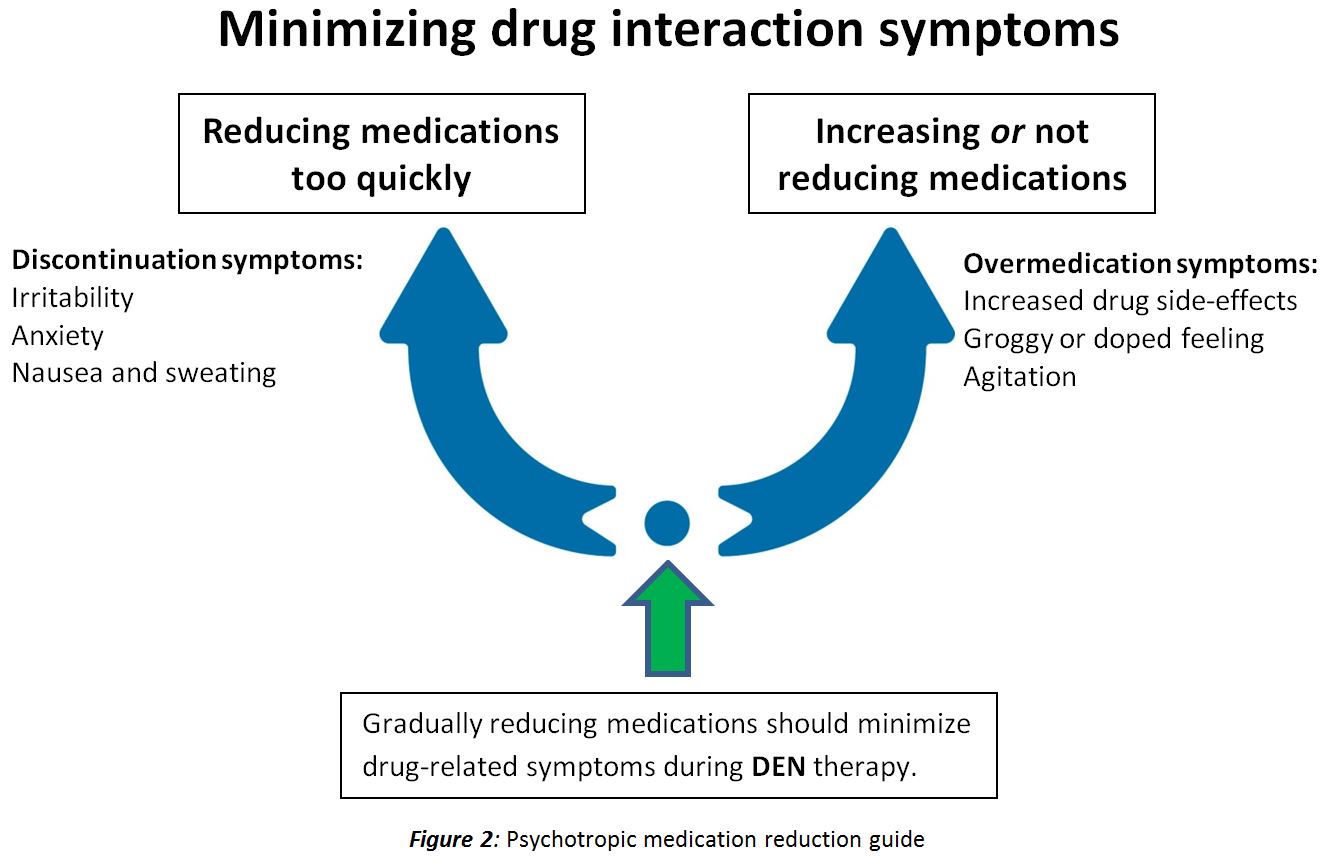 Without an awareness of the magnitude and likeliness of nutrient-drug interactions, psychiatrists have misinterpreted exacerbated side effects of potentiated medications as emerging disorder symptoms and have prescribed additional medications. This only compounds patient problems.

Chapter 6 of Complementary and Integrative Treatments in Psychiatric Practice, entitled "Single and Broad-Spectrum Micronutrient Treatments in Psychiatric Practice" (Gerbarg, Muskin, & Brown, American Psychiatric Association Publishing, 2017) states the following:
"Broad-spectrum micronutrient treatments are straightforward for psychiatric patients who are drug-naive...
"The treatment of individuals who are already taking CNS drugs is considerably more complicated.  Transitioning from conventional medications to micronutrients involves a cross-tapering process, during which clinically prominent drug-nutrient interactions usually emerge.  This transitioning process can be difficult because of 1) potentiated psychiatric drug side effects; 2) increased psychiatric symptoms as drug doses are tapered down; 3) potentiated, protracted, or delayed drug discontinuation symptoms (including anxiety); and 4) situational anxiety that accompanies the transition...It is strongly advised that clinicians obtain training and/or supervision before attempting to transition patients taking conventional psychiatric medications to broad-spectrum micronutrients.  Individuals who consume caffeine, nicotine, alcohol, or recreational drugs may also notice interactions with broad-spectrum micronutrients.  People who ingest large amounts of these substances (e.g., four cups of coffee daily, marijuana twice weekly) are likely to notice weaker therapeutic effects of micronutrients... (emphasis added) "Initial evaluation of patients includes standard psychiatric evaluation, medication history (duration and last use of CNS-active agents, marijuana, other recreational drugs, caffeine, alcohol, nicotine), assessment of the individual's willingness to reduce his or her usage of these drugs, contraindications (Candida infection, prostate cancer), and antibiotic usage...
"...informed consent may include explicit statements that...5) adverse effects include potential worsening of Candida infections...7) nutrient interactions with psychiatric and nonpsychiatric medications can occur; 8) the prescriber should be contacted when starting any new drug, especially an antibiotic; and 9) reducing or preferably stopping recreational drugs, caffeine, alcohol, and smoking will enhance treatment effectiveness and safety...If transitioning a patient from psychiatric drugs, the medical record should explain the reason each time a psychiatric drug dose is lowered, such as adverse effects detected, withdrawal symptoms, or other specific clinical observations in the individual patient; it is not sufficient to appeal to a general protocol... (emphasis added) "...broad-spectrum micronutrients appear to potentiate virtually all CNS-active drugs."
Health professionals should feel free to call (855) 955-1114 to consult with our science team.  We have gleaned some very valuable insights into the clinical management of such situations from doctors who have reported back to us their experiences.
2) Digestive health cannot be overlooked as a powerful modulator of response to oral micronutrient therapy
Extensive clinical experience has revealed that, second only to medication interactions, bowel dysfunction (including microflora dysbiosis) is the primary cause of poor outcomes using Daily Essential Nutrients.  It appears that Daily Essential Nutrients (DEN) acts almost like a magnifier of whatever microbiome setting exists prior to micronutrient supplementation, for better or worse.
You may have noticed the following interspersed with the discussion of medication interactions in the above excerpts from Complementary and Integrative Treatments in Psychiatric Practice
"...adverse effects include potential worsening of Candida infections..."
"...the prescriber should be contacted when starting any new drug, especially an antibiotic..."  (emphasis added)
"Initial evaluation of patients includes...antibiotic usage..."
As substantiation for the warning about yeast infections, a link to a published case study documenting micronutrient exacerbation of a confirmed Candidiasis infection can be found on the Hardy Nutritionals research page.  The patient responded positively to micronutrients only after antifungal treatment had first addressed the Candida problem:  Could yeast infections impair recovery from mental illness? A case study using micronutrients and olive leaf extract for the treatment of ADHD and depression. Rucklidge JJ. Advances in Mind-Body Medicine. 2013 Summer;27(3):14-8.
As for antibiotics, based on substantial feedback from clinicians using our products, our Clinical Reference Guide recommends a 50% increase in DEN dose during a round of oral antibiotics to avoid significant symptom regression that would likely otherwise occur.  To quote again from Chapter 6 of Complementary and Integrative Treatments in Psychiatric Practice:
"Oral antibiotics and antifungal treatments usually require an adjustment in micronutrient dosing.  The intestinal microbiome is crucially involved in micronutrient absorption (and for some vitamins, synthesis), so antibiotics sharply reduce nutrient absorption and can lead to a return of psychiatric symptoms.  This problem is avoided by increasing the micronutrient dose by 40%-50% during the antibiotic therapy plus 4 additional days.  For chronic antibiotic treatment (e.g., acne), the micronutrient dose can be adjusted around the antibiotic dose."
Additional Resources
We have accumulated a lot of clinically relevant institutional knowledge over the years from clinicians who have reported back to us their experiences using our products.  Please feel free to call and consult with our science team at any time or schedule a chat now and consult our Clinical Reference for Healthcare Professionals.
Most of the products we carry in addition to Daily Essential Nutrients have specific applications in managing drug interactions and improving gut health.  In cases complicated by medications or gut health, clinicians should rely on the resources we have to offer.
In addition to questions, we welcome reviews of successful cases.  Please share your clinical experiences by emailing our service team.

About Hardy Nutritionals®
Hardy Nutritionals® multivitamin-mineral products are powered by our proprietary NutraTek™ mineral delivery technology, which combines each mineral with specialized organic molecules—just like nature—to optimize absorption and distribution to body cells. Our flagship supplement, Daily Essential Nutrients, is widely considered to be the most research-backed micronutrient treatment.
University of Lethbridge Researcher Studying Micronutrients and ADHD
Soundbite From Our Scientists: Oral Antibiotics
Hardy Nutritionals is interested in what you think of our articles. We welcome your comments but request that they relate to the article you are commenting on. Comments that do not relate to the article will be marked as SPAM and rejected. Thank you. Hardy Nutritionals.
X