Nancy's Recovery from Bipolar and PTSD 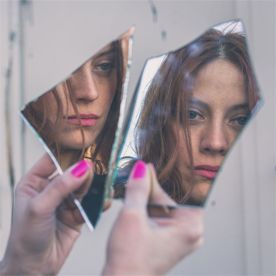 In 2009, I had just started menopause and could only sleep 3 hours a night. For the past 20 years I had a job that required 100% travel - I was always on the run and I was exhausted.

In addition to the grueling work schedule, the last 9 years were especially rough. I had gone through a divorce, witnessed my father falling further into Dementia and my mother succumbing to Alzheimer's. Shortly before my father died, I moved my mother into my home together with a full-time caregiver. She died a year and half later. And then 9 months later my dog died.

I needed a more balanced life, so I quit my job and joined a start-up company in the hopes that I wouldn't need to travel so much. But the start-up had its own challenges--I was still traveling a lot and working 18 hour days.

It all became too much for me to handle. I felt myself unraveling and I had an emotional breakdown early in 2010. I fell away from everyone and tried to face the hard truths while in isolation, but it turned into a 10 day psychotic episode. When I came out of it, I visited a doctor who was concerned that my disrupted sleep schedule may have contributed to the delusional aspects of the episode. He prescribed Seroquel which left me in a comatose state. I wasn't able to function or work until I was weaned off 2 months later.

Still confused about what had happened to me, I went back to work and my normal routine - there was a business to run. While out of town on a work assignment and less than 2 months after being weaned from the Seroquel, I was sexually abused. I didn't tell anyone about it at the time--I suppose I must have been in shock and I buried it deep down inside of me instead. But the fear wouldn't let me rest. I collapsed at bar a few weeks later when a few men approached me; I slept with all the lights on; I would drive to the gas station in the middle of the night and woke my neighbors up at 3 am on several occasions just so I wouldn't be alone.

I had another breakdown early in the fall--but unlike the first one, this episode came on quickly and frightened me to the core of my being. I felt my very soul was at stake. In the process, I inadvertently hurt myself physically and landed in the hospital.

At the time, I wasn't able to recall the rape--I wasn't able to face it and had buried it within me--so I wasn't able to tell the doctors what had happened 2 months earlier. The doctors diagnosed me as bipolar based on my symptoms and placed me on Lithium. Within the first few months I knew something was wrong with the meds. My thinking felt muddy and I wasn't able to focus my thoughts. What was worse is that I was still experiencing unknown fear -I didn't feel safe. I didn't understand why the fear was breaking through, so I mentioned it to my doctor. He wanted to switch me back to the Seroquel, but I refused considering the horrible experience I had with it the first time. Meanwhile, the Lithium caused severe skin and Thyroid problems and I developed a Goiter on my neck.

I was confused by everything that was happening and I didn't know who else to turn to for help. I mustered the courage to visit a priest and go to confession for the first time in 40 years. Even though I wasn't able to recall the rape incident, something changed within me after that visit. I knew in my heart the Lithium was the wrong medication for my bipolar disorder. I had developed severe skin problems, hypoactive Thyroid and a Goiter. By the grace of God, I was able to find the Truehope website - I still don't know how I managed to find it considering the Lithium was clouding my thoughts. I was elated to find an alternative solution that was vitamin and mineral based. I mentioned the supplements to my doctor, but he refused to support anything other than prescription medications.

Determined to get off the Lithium, I contacted a Truehope consultant who provided me with the name of a local psychiatrist. I switched doctors and successfully transitioned from Lithium to Truehope EMPowerplus+ in the summer of 2011 (over a 2 week period) and all of the physical side-effects caused by the Lithium disappeared! I felt clarity of mind return and I quickly got to work on the emotional and spiritual aspects of my life.

I was still concerned about my mental abilities after being on the Lithium for bipolar so I enrolled in some college courses a few months later. The courses focused, stimulated, and challenged my thinking--especially math--and gave me confidence that my mind was working.

But something was still niggling at my thoughts. In 2012 and 9 months after transitioning to Truehope - I had a startling breakthrough after a friend inadvertently triggered the memory of the rape and all of the pent up emotions came tumbling out. All that was hidden was revealed and brought into the light.

My doctor confirmed that I was suffering from Single Incident Trauma - a form of PTSD (post-traumatic stress disorder). Despite the realization and diagnosis, I felt a sense of relief - at last I understood what had happened.

I wanted to get on with my life and felt that I no longer needed the full dose of supplements or the expense, so I cut the dosage by half. I was wrong. I suffered a severe set-back within months which included tremendous anxiety and panic attacks and it took several months to get me back on track again. In retrospect, even though I was finally able to face the sexual assault, I was just beginning my journey of healing and needed all the support I could get. I had also been sexually abused when I was in my teens and came to understand the dramatic impact of the emotional and spiritual wounds from my youth had on my entire life.

The good news is that healing did come over time. In 2013, I switched to the Hardy Nutritionals® formula Daily Essential Nutrients without any problems at all. Today I feel strong emotionally and spiritually.

I am grateful to God, Truehope, Hardy Nutritionals® and all of the friends and family that have cared for me along the way and without which I would not be where I am today.

May God bless the scientists at Hardy Nutritionals® for formulating and sharing such safe and beneficial supplements.

About Hardy Nutritionals®
Hardy Nutritionals® multivitamin-mineral products are powered by our proprietary NutraTek™ mineral delivery technology, which combines each mineral with specialized organic molecules—just like nature—to optimize absorption and distribution to body cells. Our flagship supplement, Daily Essential Nutrients, is widely considered to be the most research-backed micronutrient treatment.
New, Concentrated Daily Essential Nutrients now Available on GetHardy.com
Updated Clinical Reference for Healthcare Professionals Now Available
Hardy Nutritionals is interested in what you think of our articles. We welcome your comments but request that they relate to the article you are commenting on. Comments that do not relate to the article will be marked as SPAM and rejected. Thank you. Hardy Nutritionals.
X