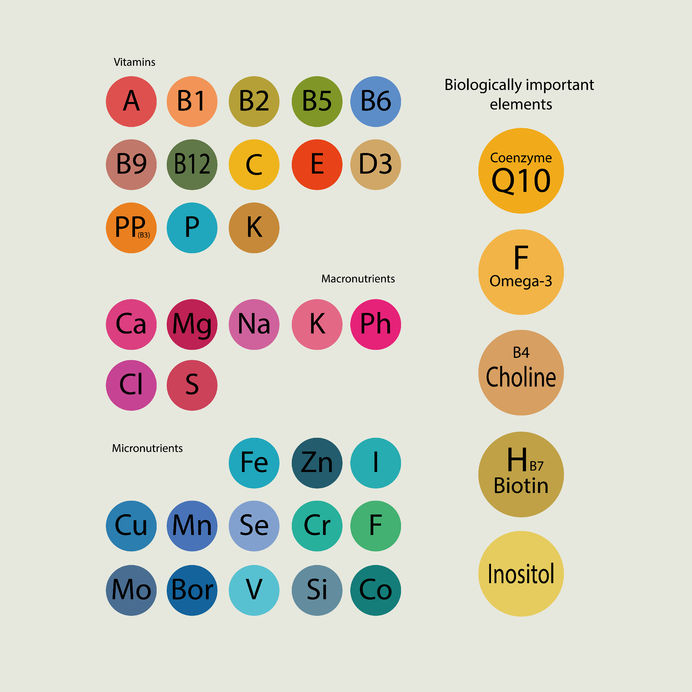 macronutrients, because deficiency of any of them could lead to severe disease.

A seemingly widespread growing interest in micronutrients stems from the increase in knowledge and understanding of the biochemical functions of these nutrients. Let’s take a deeper look at their importance.

Let's take a short, technical look at the biochemical functions of micronutrients.

As you can see, micronutrients are imperative to the body's functions.

What Happens When a Person is Deficient in Micronutrients Due to Insufficient Intake?

Impaired metabolism is a consequence of insufficient intake of supplemental and the effects can be detrimental: such as weight gain, heart disease, diabetes and more.

Chromium deficiency has been linked to glucose intolerance. Chromium has a role in improving insulin action.  Insufficient amounts of chromium translate to decreased insulin activity and can be incredibly unhealthy for diabetic patients.

High levels of homocysteine are a risk factor for coronary heart disease.  Folate ensures that homocysteine is converted into a form that is not harmful.  Vitamins B12 and B6 are also required in the metabolism of homocysteine.  A study by Wald et al. has estimated that lowering homocysteine concentration would reduce the risk of ischemic heart disease by 16%, deep vein thrombosis (25%), and stroke (24%) (Wald et al., 2002).  This could be achieved by increasing folic acid intake.  Beware of cheap forms of folic acid.  Methylated folate (calcium L-5 methyltetrahydrofolate) is especially important for those with the MTHFR genetic mutation.

Zinc is important for the synthesis of proteins.  Wolman et al. (1979) determined a good zinc balance is associated with improved nitrogen retention, and a better nitrogen balance.  Substantial amounts of zinc are lost in the gastrointestinal tract and therefore proper supplementation is important.  Adequate zinc provision is necessary not only to stimulate protein synthesis, probably as a result of increasing the activity of the many zinc dependent enzymes in the protein synthetic pathway, but also to stimulate an adequate insulin response and utilization of glucose as well as amino acids, as well as to balance out copper.

Due to factors such as decreased appetite, decreased absorption, loss due to diarrhea, trace elements concentrations are considerably reduced in HIV infection and AIDS. This affects the ability of the body to fight off the virus. For instance, low levels of selenium in children leads to faster progression of disease.

A study in mice also showed that influenza virus causes more severe lung disease in selenium deficient mice (Beck et al, 2003). If the same is assumed in humans, then it is important to maintain optimal levels of the mineral selenium.

Calcium and vitamin D are important in the maintenance of healthy bone mass. This is particularly important in post-menopausal women who are a high risk group of osteoporosis. Vitamin K is also important to bone mass health.

In the elderly, studies, such as that done by Ellison et al., have used folic acid, vitamin B12 and vitamin B6 to improve cognitive function (Ellinson et al., 2004). A large study involving residential schoolchildren in India showed that 14 months' supplementation with a well-balanced vitamin and trace element supplement, led to significant improvement in attention‐concentration (Vazir et al., 2006).

More recently, a study published in the Journal of Child Psychology and Psychiatry, demonstrated improvement in aggression and mood in children with ADHD using Daily Essential Nutrients, a clinical micronutrient formulation by Hardy Nutritionals®.

In conclusion, micronutrients play a key role in the maintenance of cell and body tissue function and metabolism irrespective of age. Therefore adequately balanced and bioavailable intake is necessary for all age groups.

About Hardy Nutritionals®
Hardy Nutritionals® multivitamin-mineral products are powered by our proprietary NutraTek™ mineral delivery technology, which combines each mineral with specialized organic molecules—just like nature—to optimize absorption and distribution to body cells. Our flagship supplement, Daily Essential Nutrients, is widely considered to be the most research-backed micronutrient treatment.
Why Micronutrients Are Needed
Why Micronutrients Are Important For Health
Hardy Nutritionals is interested in what you think of our articles. We welcome your comments but request that they relate to the article you are commenting on. Comments that do not relate to the article will be marked as SPAM and rejected. Thank you. Hardy Nutritionals.
X