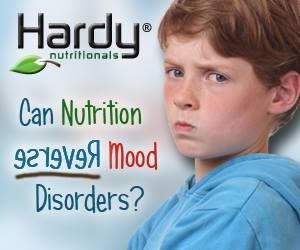 My son who is now 9 years old has struggled with emotional issues since he was a toddler. He always just seemed more on edge than other toddlers and when he would get upset it was really hard to calm him or help him with a solution as he would push everyone away.

As he got older things only got worse. We would have a good day--where I would see my son (my happy, caring, kind, loving, thoughtful, insightful child)--then we would go several days of not seeing his pleasant side at all. Instead we would see a frustrated, angry, unhappy boy who would lash out in anger, break things, yell, and then retreat to hiding in his room from everything and everyone--saying disturbing things like "there is no point to life" and "why should I even try to keep going."

By second grade we pulled him out of school. He would work so hard to be on his 'good behavior' while he was there that by the time school got out he was an emotional basket-case. We would then spend the rest of the day trying to calm him down. We moved that summer and decided to try and put him into the new school where we had moved to because home-schooling was hard on our family.

3rd grade was survived but not the greatest year. By the time 4th grade started, he was having issues not just at home but in public--especially at school. He would have complete emotional break downs with the simplest of things and we never knew what triggered them. He would run out of the class and hide in the bathroom to cry or throw class items and crumple school work. We were at a loss for what to do to help him. All parenting techniques had failed at this point in time. We knew there was a real problem that couldn't be fixed with just better parenting.

We were considering medicating him for depression but didn't really like the side effects of some of those options. That's when my mother-in-law found Daily Essential Nutrients. We figured it was worth a try.

By 6 weeks, we were already noticing that his tantrums were lasting less time, he was less withdrawn and we were starting to see our happy boy again. By 8 weeks, it was 1 day in 10 that was bad instead of 1 day in 10 that was good. Here we are just a few months later and we couldn't be happier.

He still gets upset at things but unlike before it's a normal 9 yr old frustration that is vented with a few short verbal outbursts and then he quickly moves on. At school he has progressed enough that he no longer sees the counselor at all. His teacher reported that he is a different person, he is HAPPY.

Having my happy, loving son re-enter my home has blessed us in so many ways and we are so glad that we have been able to do it in a healthy way instead of defaulting to modern drugs that have so many side effects.

This has been our experience with Daily Essential Nutrients and we are so grateful for it.